Dubai International Racing Carnival 2010: ASIA, UNITED ARAB EMIRATES, EMIRATE DUBAI, DUBAI 28.01.2010: A jockey leaving the track after a race. The billion-dollar Meydan racecourse opens it doors to the public on January 28, 2010, with the launch of the 2010 Dubai International Racing Carnival. Meydan is the vision of His Highness Sheikh Mohammed bin Rashid Al Maktoum, vice-president of the UAE and ruler of Dubai. Sheikh Mohammed first unveiled his plans to build Meydan on March 30, 2007 - and in 1033 days his dream has turned into reality. Meydan is more than a racecourse: it features state-of-the-art facilities for horses, horsemen and guests, with turf and all-weather tracks, lavish hospitality suites and the world's first five-star trackside hotel. The grandstand is the world's longest and has a crowd capacity of 60000. The season-ending Dubai World Cup remains the world's richest race, with a record-high prize-money of 10m USD, up from 6m the previous year. January 28, 2010, is day 1 of the Dubai Racing Carnival season. 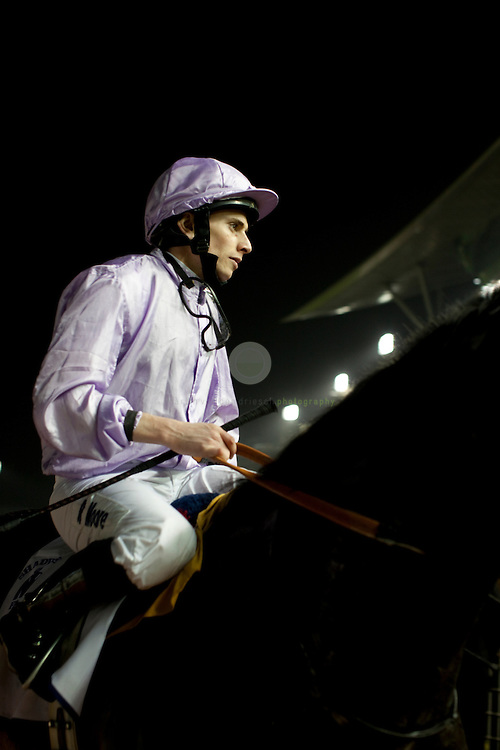